I agree with this article. If we cannot predict what the future will look like in 2030 (which is only 13 years away), how can we assume that we can create a knowledge base that our kids will definitely need in 13 years time? Will translation software have killed language barriers by then? Will maths, spelling, coding and lots of ‘technical’ skills be replaced by software or AI that supports us? And if that is the case, what are the things our kids should really excel at if not relationships, curiosity, agility, creativity and empathy?
(If not to say that I strongly believe that the fact that we have almost all knowledge at our fingertips, is killing our creativity. Having everyone at digital arms length is killing interaction. And as all of that becomes more impersonal, we slowly grow unaccustomed to initiating change through vision, having change change us instead.)
We need to get out there and dream. We need to get out there and be passionate about the things we want to achieve. And that is something we should teach our children more than anything else. Though the world might have been explored on the map, life is -and never will be- explored to the fullest. There will always be something more, something extra, something new to build, to explore, to enjoy.

This morning Chris Guillebeau shared three quick lessons that he had learned while he visited every country in the world.

Time and Money
If you cannot understand all of the different costs of a project, then the project or the quest becomes much easier to pursue and to complete.
For Chris personally, he just wanted to travel. And then he changed it to visiting 100 countries in the world. He thought about it and started to share it. But then he got the criticism from someone that visiting these countries was not going to be hard, all you need is enough time and money. Which caused him to structure his quest. Which meant figuring out what he had to do to succeed and what the cost of succeeding would be. And then he could break it down and share it as it all grew and became possible for him.

Experience produces confidence
Actually going and doing, helps you become confident that you can do it. Start with the smaller things first, then build up. It will help you grow. As you succeed in smaller things, you will help you understand that you can succeed at the big goals as well. He has seen others look up to him and playing down their own quest, because his had been much bigger. But whatever your quest is, it is the most important thing for you to focus on. The most important thing in your life at that time.

You are not alone
The new demographics are less about where you come from, but more about psychographics. About shared views, shared values etc. In essence, you are not allone. If you have a crazy idea, if you believe there is nobody as crazy as me, then there certrainly other people all over the world that share your passion. That want to make the same ideas succeed. So, it has helped him a lot to see that other people had the same dream and made it succeed. And it helped him to tell their tales to grow in his own understanding of his own quest.

Two suggestions to live by:
Get your own quest. It is important. As Elon Musk said, we spend too much time on small things. And we need to move up in the world and build a bigger thing. And all the people Chris has talked to that have gone on to try their own grand adventures, and they shared with him that at some point they had just decided to go for it. Whether it would succeed or not, it was important for them to do it and it changed them.

Find a way to tie your quest to something that makes the world a better place.
There are so many opportunities to mean something to the world. And it is not meant to sound heavy or be a heavy responsibility, but it is about sharing and helping build the world. And doing that is not just about giving things up for others, it is also about the fact that through doing that, it will contribute to us. It will change us, build us up which he shared he experienced when Chris and his wife worked with an NGO on a hospital ship.

A great story. And yes, I want to live up to at least part of that. That is why I am building TechPastors. Because I have a dream, I want to pull it off and I believe that I am not alone in believing that the church and Christian organizations could really do with a clear view of what you can do with technology. So, I am going to push forward. Want to help? Let me know! 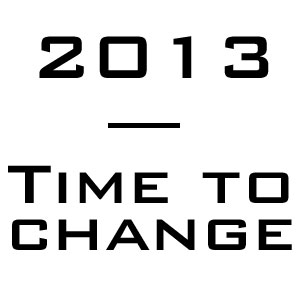 Yes, 2013 has finally rolled around. It has taken a year, but here it is. So, this is the best time to wish all of you a great 2013 in which you can fulfill your dreams and chase even bigger ones. The year in which your startup will succeed beyond your expectations. And the year in which you will learn you can be more than you have ever imagined before.

I believe 2013 is a year of endless possibilities. You might think that most of the big successes have been achieved, but I strongly disagree. Yes, Facebook is a huge network and it is going to be hard to take over that position. But nothing is impossible. That is why I would like to share my list of areas in which you can be very successful in the coming year and change the world.

Just five rough areas in which I think there are huge opportunities that I hope to see startups get into in 2013. However, this list is not complete without mentioning context. I know Robert Scoble and Shel Israel are writing a book on the subject and rightly so in my opinion. It is time that we all realize that whatever we build should not be functioning in a vacuum. It should look at the environment in which it is used and pull in information from that environment to make your experience better. Google Glass and Oakley’s Airwave are interesting examples of how external information is combined with digital services to turn whatever you are doing into a much better and much more complete experience. Five years ago, I talked to one of the founders of Layar who told me that “if you are building anything that you are not putting a geotag on, you will be obsolete soon”. His idea about this might not have become reality in the way they had expected, but there are so many outside factors that we are able to combine with services now, that we have to conclude that using context in the right way is going to be changing our online experience completely once again.

So, how can these tips help you beat Facebook? In reality, every single one of them might trigger a revolution that is bigger than Facebook is. Remember, Facebook has only been around eight years and pushed other huge players off the market. Any of these factors, whether it is our mobile life, our entertainment experience, the way we interact through video, how we ‘play’ with our money or how we work with our health can change the way in which we interact with others completely. If the experience is different enough, the social experience is awesome enough and the vision users catch while using it is one they love, it will overtake current day networks. The only thing you need to be able to do is to see beyond the canvas that is there at the moment. See beyond the timeline, beyond the folders and albums that make up social networks. See the people, see their goals and loves. See what motivates them beyond the visible. And you can be on to a winner for 2013.

It is a week after day 2 of LeWeb in Paris. And when I went to LeWeb I had Jeroen voor ‘t Hekke tell me that Scott Harrison was someone I had to see on stage. Needless to say that I was running around like crazy that whole days and I never got to see him. I saw a picture of Mercy Ships‘ Anastasis pass by on a screen somewhere in a room, but that was about it. Today I chose to sit down and watch his talk. If you have not seen it, I urge you to watch it.

This morning, I left my TV inspired. Scott went out and did something that I have been talking about for the past year to a number of charities. He has done something that many charities can do, but either are afraid to or cannot see function in their particular situation. He has brought the charity back to the people. By splitting income between the money needed to do a project and the money needed to run the organisation, he has made Charity: Water a much more transparent place. By giving GPS coordinates for every single well dug. For putting the donors name on the plaque that sits at the well. But mostly by having ordinary people ‘own’ the project. By allowing people to decide that they are going to be helping 5, 15 or even 1500 people get clean drinking water. And then enabling them to raise the funds to do exactly that, without having to worry about what will be taken off that budget as overhead for the organisation.

I truly believe we can change the world. And there are many who show us. Scott’s example is one that we can easily understand. But now we need to put it to work. 800 million people do not have clean drinking water. And then there are thousands of other things that we can do every day that keep us alive and healthy that other people do not have. Get inspired. Set your dream and go for it. I know this has got me thinking.

Watch the video below. And tell me, where will you be in a years’ time and whose live will you have impacted?