Google launches the new Android, why did you get the 4S? 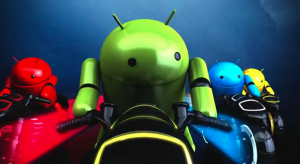 Last night Google launched their new version of Android and the new Android flagship phone, the Galaxy Nexus. Naturally the phone is all you would expect of a new smartphone with dual core processors, great screen etcetera. However, last night was all about Android and just a little about the phone.

Ice Cream Sandwich, as Google has named their new Android 4.0, is full of great new developments making it smarter and easier to use. Just a quick run of all the new features:

Multitasking has been improved with a new screen that allows you to flip through your running and last used programs. Just a simple drag will get you straight back into them.
Resizable widgets allow you to adjust the size of a widget to show more or less information depending on your needs. A great addition as it will allow you to arrange your stuff better.
Lock screen actions allow you to see your notifications without unlocking your phone and it also allows you to quickly take a picture as we have already seen the iPhone do. You can also quickly respond to a caller by sending them a standard text message when you are not available. Great if you want to tell someone you would love to talk to them, but the timing is just off.
The new notification screen allows you to do more with your notifications and work with them more intuitively. It has just improved on its own standard again.
The new spellchecker and soft keyboard allow you to input text even faster with better error correction. Naturally we have to see how this is going to work in practice, but with new word suggestion technology it might just kill those autocorrect failures.
Obviously Androind comes with a new voice input engine. It has an always open microphone and it will allow you to dictate large texts including punctuation on your phone. Sure, it might not tell you whether you need an umbrella, but with its technology supporting many languages and quick correction for dictation errors, this might just be the ticket to be more productive on the road. I have to say that the voice input engine on 2.3 has been my most used feature on the Nexus S, so I am looking forward to this. And besides, the versatility of Android allowed programmers to put together Iris in eight hours during a hackathon. I bet a competitor for Siri will not be long.
For people with metered subscriptions, the new Android version allows you actively limit your data usage with great graphical overviews of your data usage that you can set your own limits on.
Android also has new accessibility options that will allow you to use your smartphone without even seeing the screen. These features are great for the visually impaired with audible feedback on what you are doing.
The new people and profiles brings more information together about your contacts and creates a new “me” profile that can be easily shared with others.
There are also changes to the calendars making them more unified and a new visual voicemail app that allows other apps to add messages for a complete overview.
And then we got to the toys. Google has been playing with the camera as well. The new camera app has face detection, a continuous focus setting, but also a tap to focus option that we have been missing for a while now. To take a better shot at that scenic location, the new camera app allows you to do a single-motion panoramic shot, saving a lot of stitching. The gallery has been improved and now features a photo editor as well. And the video camera allows you to do live effects for transforming whatever you are filming. Not sure why you would want to do that, but hey, it can be fun. More useful is the new feature to film yourself against a background that you have set yourself.
Finally Android will allow you to easily make a screenshot of your phone and share that. Now that is a feature that I have been waiting for.
Google didn’t do anything to make its phone cloud connected, but they did take the time to explain that they didn’t need to do that, as they have always been completely in the clouds.
Google will also bring more of the Chrome experience to Android. It will sync bookmarks with your computer and has dramatically improved rendering performance. Looking forward to seeing that.
The email experience has also been improved with better auto-completion of recipients, new quick response options, nested subfolders and new security options for enterprises.
And here is where it becomes geeky. And I love it. Android has been fitted out with Beam. Beam can share whatever you are doing with another Android phone through NFC (Near Field Communications). Whether that is a website, contact information or even a game you are playing, just put the two devices together and you see the same thing.
To keep your phone from being used by people you don’t really like, you can now use face recognition. Hold the camera in front of your face and it will unlock if it recognizes your face. During the demo something did go wrong there, but it will probably be ironed out soon enough.
Oh, and for sharing your stuff, you can easily set up a direct wifi connection between two devices as well, having your own private network. Not necessarily with an internet connection.

Seriously, I am looking forward to this update. For me, this has countless updates that I will be using every day. Last week I was doubting whether I was going to get the iPhone 4S. Now, the only difference with the 4S for me would be Siri. And I am not going to spend that kind of money to talk to my phone. I would rather talk to the people around me. Besides, someone is going to build an alternative anyway. So, I am looking forward to Google rolling out the Galaxy Nexus in November as I am sure my Nexus S will receive the Android Ice Cream Sandwich update as well. Too bad they did not specify a launch date for that just yet. Read up on everything on Android.com.